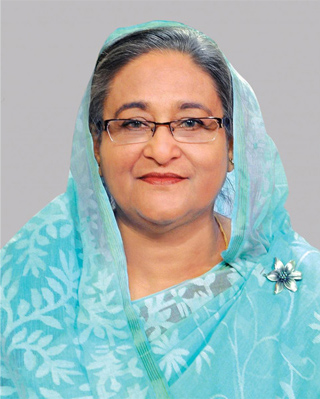 Honourable Prime Minister
Government of the People’s Republic of Bangladesh

Sheikh Hasina, the Prime Minister of the People’s Republic of Bangladesh, assumed the office on 07 January 2019 for the fourth time after her party Awami League-led grand alliance won the December 30, 2018 11th Parliamentary elections.

Sheikh Hasina, the Prime Minister of the Government of the People’s Republic of Bangladesh, assumed office on January 12, 2014 for the third time after the grand alliance led by her party Bangladesh Awami League won parliamentary election on 5th of January.

She became prime minister for the first time on June 23, 1996 when her party Bangladesh Awami League acquired majority in the general election held on June 12, 1996.

After the term, conspiracy designed by the then caretaker government led Bangladesh Awami League to lose the general election in 2001 and Sheikh Hasina became the leader of the opposition again. A military-backed caretaker government took over the office in 2007 as the BNP-Jamaat government failed to hand over power in a peaceful manner in 2006.

After two years in the office, the caretaker government organized the 9th general election on December 29, 2008. Sheikh Hasina’s party earned a landslide victory with a two-third majority in the widely acclaimed free and fair election leading her taking over the office of the prime minister for the second time on January 6, 2009.

Earlier, in the parliamentary election held in 1986, Sheikh Hasina won from three seats. She was elected Leader of the Opposition. She led the historic mass movement in 1990 and announced the constitutional formula for peaceful transfer of power through Articles 51 and 56 of the Constitution.

Following the election of 1991, Sheikh Hasina became Leader of the Opposition in the country’s Fifth Parliament. She steered all the political parties in the parliament towards changing the Presidential system of government into the Parliamentary one.

Sheikh Hasina is a staunch crusader against fundamentalism, militancy and terrorism. Assuming the office on 6 January in 2009, her government enacted laws to constitute International Crimes Tribunal to try those who committed crimes against humanity during the Liberation War of Bangladesh in 1971.

The fundamentalist forces led by BNP-Jamaat vehemently opposed the trial and smeared an unholy campaign at home and abroad to foil the people’s mandated move to bring the war criminals into book. Braving all odds, the government of Sheikh Hasina has been going ahead with the trial.

Failing to foil the trial, the BNP-Jamaat resorted to widespread violence throughout 2013 killing innocent people and law enforcers, and carrying out vandalism and arson. They also tried to thwart the 10th Parliamentary election by carrying out violence, killing innocent people, and vandalism and torching numerous vehicles and establishments. But the government of Sheikh Hasina frustrated all destructive activities and conspiracies of the opposition. The 10th parliamentary election was held and her party-led grand alliance earned a landslide victory in the election.

Sheikh Hasina, the eldest of five children of the Father of the Nation Bangabandhu Sheikh Mujibur Rahman, was born on 28 September, 1947 at Tungipara in Gopalganj district. 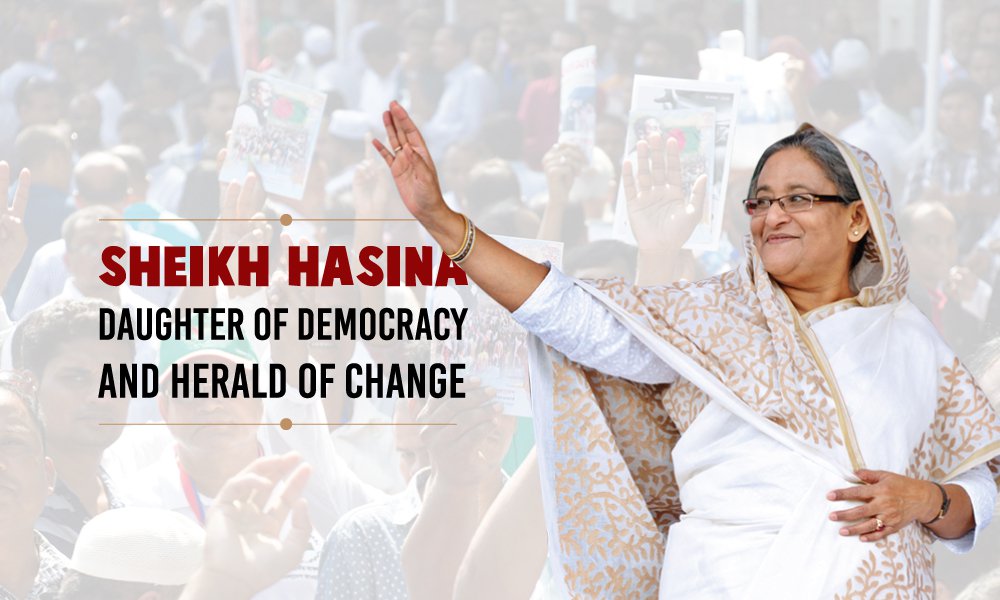 Father of the Nation Bangabandhu Sheikh Mujibur Rahman along with the members of his family was martyred on the fateful night of 15 August 1975. Sheikh Hasina and her younger sister Sheikh Rehana were the only survivors as they were in West Germany at that time. Later, she went to the United Kingdom from where she started her movement against the autocratic rule in 1980. Sheikh Hasina was unanimously elected President of Bangladesh Awami League in 1981 in her absence while she was forced to live in exile in New Delhi. Ending six years in exile, she returned home finally on 17 May 1981.

In the 1996-2001 term, Sheikh Hasina’s government achieved laudable successes in many fields, the most significant being the 30-year Ganges Water Sharing Treaty with India; the Peace Accord on Chittagong Hill Tracts; the Bangabandhu Bridge; and food security. She also introduced beneficial programs for farmers, and social safety nets for the distressed, landless and deprived. These included allowances for distressed women, widows, the disabled and freedom fighters; Shanti Nibas for elders; Ashrayan for the homeless and “One house-One farm” scheme.

In the 2009–13 term, Sheikh Hasina’s government’s achievements included power production capacity reaching 11000 MW; GDP growth over 6 %; 5 crore people raised to middle class; ICT services centres in all union parisads; forex reserve over US$ 20 billion; distribution of agri-cards and scope to open bank accounts with Tk 10 only for farmers, poverty level reduced to 26 percent in 2013 from 31.5 in 2010 and adoption of her Peace Model by an UN resolution.

She has authored several books including “Why are they Street Children”, “The Origin of Autocracy”, ‘Miles to go “Elimination of Poverty and Some Thoughts”, “People and Democracy”, “My Dream My Struggle” and “Development for the Masses.”

Sheikh Hasina is the Chairperson of ‘The Father of the Nation Bangabandhu Sheikh Mujibur Rahman Memorial Trust.’ She believes in democracy, secularism, inclusive growth and progress and dedicated to eliminating poverty and barriers that marginalize people. Her interest is in technology, cuisine, music and reading.

Sheikh Hasina’s only son Sajeeb Ahmed Wazed is an ICT expert. Her only daughter Saima Hossain Wazed is a psychologist and has been working for the betterment of autistic children. She has five grandchildren.