FATHER OF THE NATION

The Father of the Nation Bangabandhu Sheikh Mujibur Rahman (1920-1975) is the architect of independent Bangladesh. Born on 17 March 1920 in the village Tungipara under the gopalganj Sub-division (currently district) in the district of Faridpur, Bangabandhu Sheikh Mujibur Rahman’s father, Sheikh Lutfar Rahman, was a serestadar in the civil court of Gopalganj. Sheikh Mujibur Rahman passed his matriculation from Gopalganj Missionary School in 1942, IA (Twelfth Grade) from Islamia College, Calcutta in 1944 and BA from the same College in 1947. In 1946, he was elected general secretary of the Islamia College Students Union. He was an activist of the Bengal Provincial Muslim League and a member of the All-India Muslim League Council from 1943 onwards. Bangabandhu Sheikh Mujibur Rahman was a founding member of the East Pakistan Muslim Students League (est. 1948), one of the founding joint secretaries of the East Pakistan Awami Muslim League (est. 1949), general secretary of the awami league (1953-1966), president of the Awami League (1966-1974), president of Bangladesh (in absentia from 26 March 1971 to 11 January 1972), prime minister of Bangladesh (1972-24 January1975), president of Bangladesh (25 January 1975-15 August 1975). 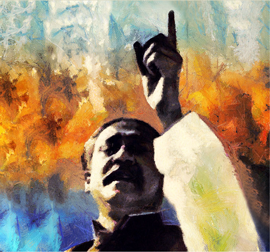 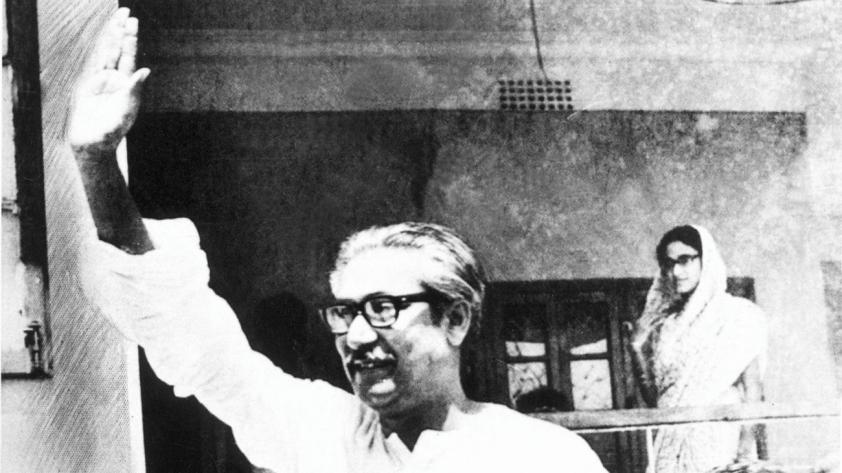 As an activist he had been a supporter of the Suhrawardhy-Hashim faction of the Muslim League. During the 1946 general elections, the Muslim League selected him for electioneering in Faridpur district.

Sheikh Mujibur Rahman was one of the principal organisers behind the formation of the East Pakistan Muslim Students League (est. 1948). After partition (1947), he got himself admitted into the university of dhaka to study law but was unable to complete it, because, he was expelled from the University in early 1949 on charge of “inciting the fourth-class employees” in their agitation against the University’s indifference towards their legitimate demands.

Sheikh Mujib’s active political career began with his election to one of the posts of joint secretaries of the East Pakistan Awami Muslim League (1949).

As an activist he had been a supporter of the Suhrawardhy-Hashim faction of the Muslim League. During the 1946 general elections, the Muslim League selected him for electioneering in Faridpur district. Sheikh Mujibur Rahman was one of the principal organisers behind the formation of the East Pakistan Muslim Students League (est. 1948).

After partition (1947), he got himself admitted into the university of dhaka to study law but was unable to complete it, because, he was expelled from the University in early 1949 on charge of “inciting the fourth-class employees” in their agitation against the University’s indifference towards their legitimate demands.

Sheikh Mujib’s active political career began with his election to one of the posts of joint secretaries of the East Pakistan Awami Muslim League (1949).

As a political prisoner, he was then interned in Faridpur jail. In 1953, Sheikh Mujib was elected general secretary of the East Pakistan Awami Muslim League, a post that he held until 1966 when he became president of the party. Like his political mentor Huseyn shaheed suhrawardy, Mujib also underscored the importance of party organisation and management. To organise the party, he resigned from the Cabinet of ataur rahman khan (1956-58) and devoted himself to the task of taking the party to grassroots level. A charismatic organiser, Sheikh Mujib had established his firm control over the party.

He had the mettle to revive the Awami League in spite of the fact that his political guru, HS Suhrawardy, was in favour of keeping political parties defunct and work under the political amalgam called National Democratic Front. Sheikh Mujibur Rahman entered parliamentary politics first in 1954 through his election as a member of the East Bengal Legislative Assembly on the united front ticket. He was also a member of the Pakistan Second Constituent Assembly-cum-Legislature (1955-1958). Sheikh Mujib was a pragmatic politician. In the Pakistan state, he appeared as the undaunted advocate of the Bengali interests from the start.

He was among the first language prisoners. However, Sheikh Mujibur Rahman grew in political eminence in the early 1960s. Through his organising ability Mujib was able to salvage the Awami League from a series of defections and exit of various factions from the mainstream party. He reorganised the Awami League and put it on a firm foundation.

Though conservative elements of all political parties looked at it with consternation, it instantaneously stirred the younger generation, particularly the students, youth and working classes. Disturbed by the political views of Sheikh Mujib, the Ayub regime put him behind bars. A sedition case, known as agartala conspiracy case, was brought against him. It may be noted that during most of the period of the Ayub regime, he was in jail, first from 1958 to 1961 and then from 1966 to early 1969. During the second term in jail, his charisma grew so much that a mass uprising took place in his favour in early 1969 and Ayub administration was compelled to release him on 22 February 1969 unconditionally.

On the following day of his release, the Sarbadaliya Chhatra Sangram Parishad (All Parties Students Action Committee) organised a mass reception to him at ramna racecourse (now, Suhrawardy Uddyan) and accorded him the title ‘Bangabandhu’ (Friend of the Bengalis).

In him they saw a true leader who suffered jail terms for about twelve years during the 23 years of Pakistani rule. Twelve years in jail and ten years under close surveillance, Pakistan, to Sheikh Mujib, indeed proved to be more a prison than a free homeland. 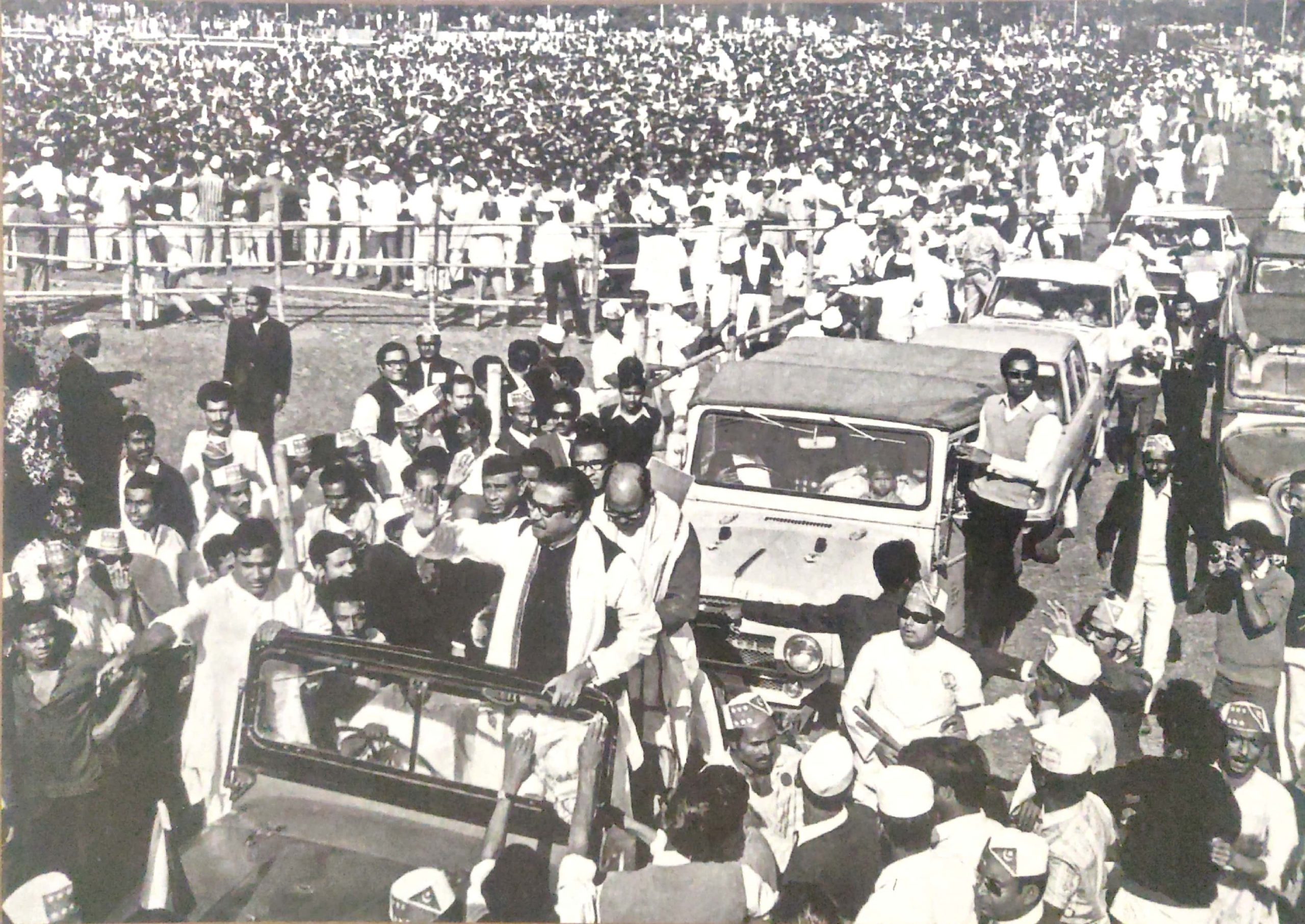 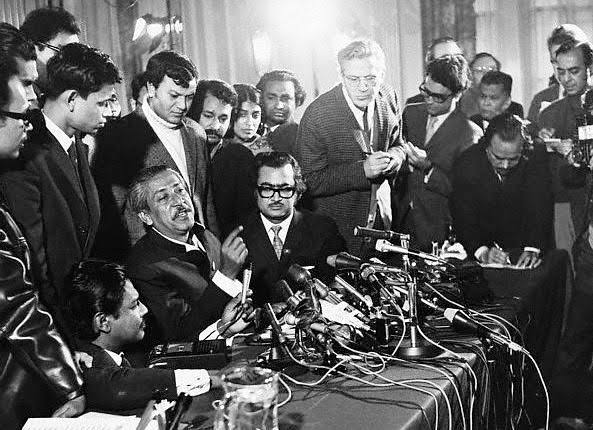 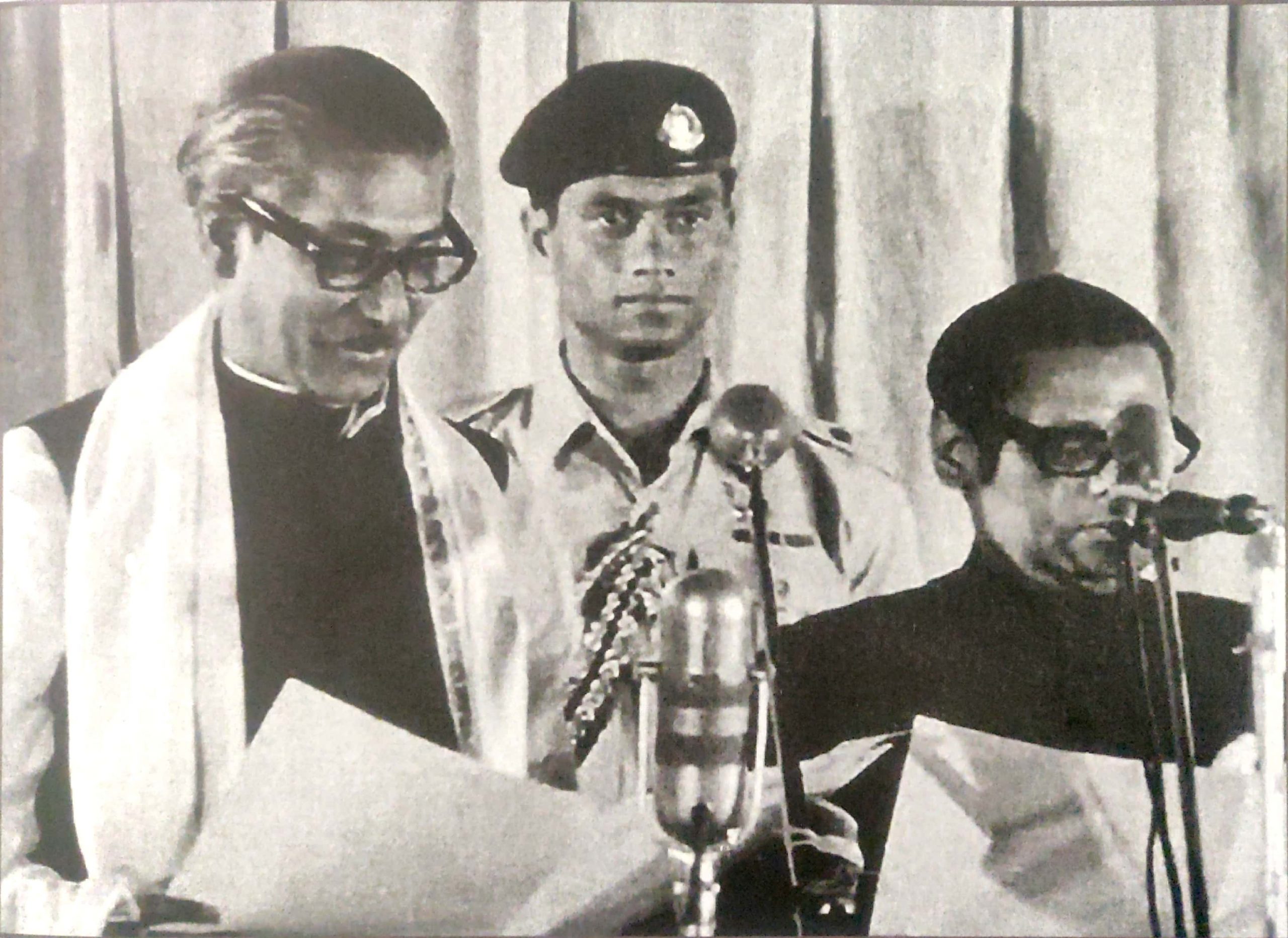 The general elections of December 1970 made Bangabandhu Sheikh Mujibur Rahman the sole spokesman of East Pakistan. The people gave him the absolute mandate in favour of his six-point doctrine. Now it was his turn to implement it.

Bangabandhu Sheikh Mujib was so serious about the six-point that on 3 January 1971, he held a solemn ceremony at Ramna Race Course with all the East Pakistan representatives and took an oath never to deviate from the six-point idea when framing the constitution for Pakistan.

Bangabandhu’s most uncompromising stand on the six-point programme led ZA Bhutto and Yahya’s military junta to take a stringent view. Instead of allowing him to form the government, the junta resolved to undo the results of the elections.

President Yahya Khan cancelled unilaterally the National Assembly meet Dhaka scheduled to be held on 3 March 1971. The announcement triggered off the death-knell of Pakistan.

During the course of non-cooperation (2-25 March 1971) the entire civil authorities in East Pakistan came under the control and directives of Sheikh Mujibur Rahman, himself becoming the de facto head of government of the province. During this time, on 7 March Mujib made a historic address at a mammoth gathering at the Race Course which marked a turning point in the history of the Bengali nation.

In his address Mujib made specific charges against the Martial Law authorities which failed to transfer power to the elected representatives. At the end of his speech, he made a clarion call, saying:

“Build forts in each homestead. You must resist the Pakistani enemy with whatever you have in hand. Remember, we have given a lot of blood, a lot more blood we shall give if need be, but we shall liberate the people of this country, Insha Allah [ie, if God blessed].

The dialogue began on the following day and continued intermittently down to 25 March morning. During the period, non-cooperation and hartals continued relentlessly.

Students and leaders of various political parties had been declaring independence from March 2 and the spree continued down to 25 March. At mid-night of 25 March 1971, the Pakistan army launched its brutal crackdown in Dhaka. Sheikh Mujib was arrested and kept confined at Dhaka Cantonment until he was lifted to West Pakistan for facing trial for sedition and inciting insurrection.

Although during the war of liberation begun in the wake of the 25 March army crackdown Bangabandhu had been a prisoner in the hands of Pakistan, he was made, in absentia, the President of the provisional government, called the mujibnagar government, formed on 10 April 1971 by the people’s representatives to head the Liberation War.

He was also made the Supreme Commander of the Armed Forces. Throughout the period of the War of Liberation, Sheikh Mujib’s charisma worked as the source of national unity and strength. After the liberation of Bangladesh on 16 December 1971 from Pakistani occupation, Sheikh Mujibur Rahman was released from Pakistan jail and via London he arrived in Dhaka on 10 January 1972.

Bangabandhu Sheikh Mujibur Rahman headed the first government of the post-liberation Bangladesh for a period of three years and a half. Starting from scratch his government had to deal with the countless problems of a war ravaged country.

Restoring law and order, rehabilating the mukhtijodhas, restoring the ruptured communication system, and, most importantly, feeding the hungry millions and many other problems bedevilled his administration.

Because of his charismatic leadership Bangladesh gained recognition from the international community including the United Nations.

Bangabandhu Sheikh Mujibur Rahman was assassinated by a group of disgruntled army officials on August 15, 1975 along with most of his family members excepting for his two daughters who had been staying abroad at that time. Bangabandhu’s eldest daughter, Sheikh Hasina, is the current Prime Minister of Bangladesh. 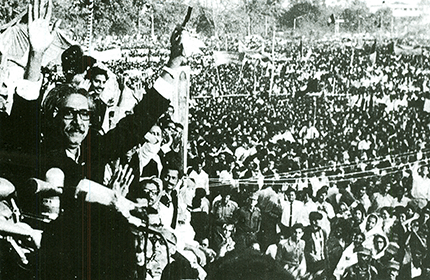 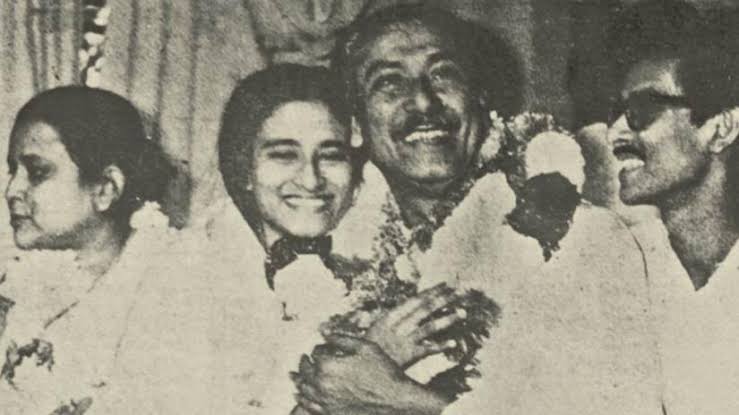 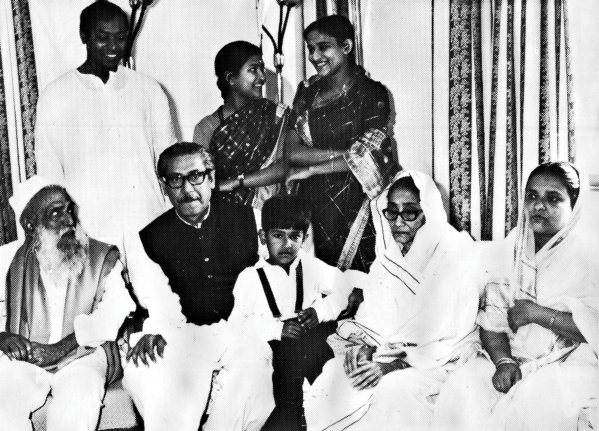